This is a post about a simple trick you can use to enjoy the things you like a little more and/or make them enjoyable to others. But first, let’s try a little experiment. Please listen to this piece of classical music. It’s only 47 seconds long.

Now write down some measure of how much you enjoyed it on whatever scale you want. Five stars, a number from one to ten, whatever. Ready? Okay, now read the following story.

On the evening of May 7, 1747 in the grounds of the just finished Sansoucci palace of Frederick the Great, King of Prussia, a 62-year old man arrives by carriage. As was the custom in those days, an officer writes his name in a list of visitors which is usually reviewed by the King.

Inside the palace, through the Entrance Hall and to the left, King Frederick is in an exquisitely decorated room, getting his flute ready for the nightly concert while the rest of the musicians tune up. The officer enters the room and gives the King the list of strangers who have arrived to the palace.

With his flute in his hand, Frederick runs down the list and immediately turns to the assembled musicians, exclaiming with a kind of agitation, “Gentlemen, old Bach is come.” He lays his flute aside, and announces to the other musicians and the rest of the people of the court that there will be no concert tonight. 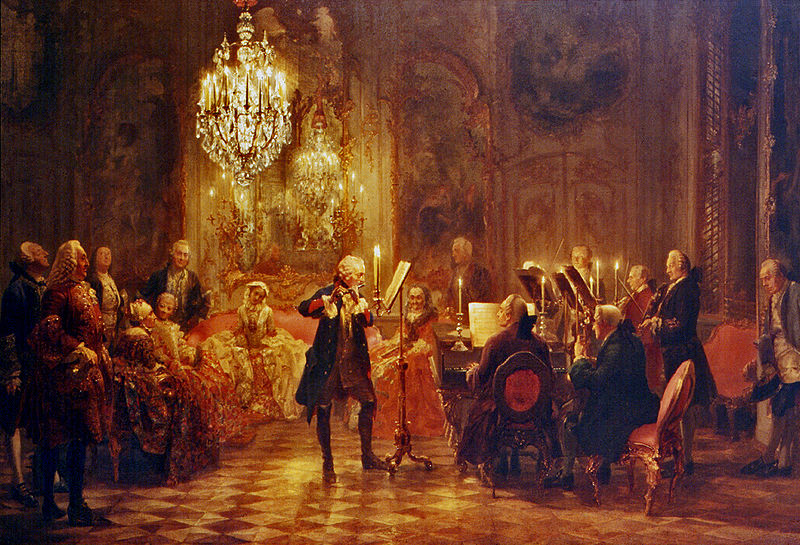 Johann Sebastian Bach has just arrived for a visit to his son Carl Philip Emanuel Bach, the court’s Capellmeister. The King had wanted to meet with J.S. Bach, and his wish had just been realized. So without even giving Bach time to change from his traveling clothes to a more formal black chanter’s gown, the King summons him to appear before his Highness. Frederick, after listening to Bach’s apology for his appearance, invites him to try his collection of Silbermann fortepianos, which are scattered throughout the palace.

The musicians follow them from room to room, and Bach is invited everywhere to try the fortepianos and play unpremeditated compositions. After going on for some time, Bach asks the King, “Would Your Highness be so kind as to honor me with a subject for a Fuge, so that I can execute it immediately and without any preparation?” The King, desiring to give such a learned musician a challenge, picks up his flute and plays the following tune:

This is quite a complex melody! One of which Michelle Rasmussen says:

The King’s theme begins with a C minor triad, (“c - e flat – g”), is raised to the next half-note above that, “a flat,” and then takes a dramatic downward leap of a seventh from the “a flat” down to “B”, not included in C minor, but found in C major. This creates musical tension between two pairs of half-step intervals: from the ”B” back to the beginning “C,” and the “g - a flat” interval.

Picking up on these half-steps from the first part, the second part of the Royal theme is a revolutionary ambiguous step-wise descent from the top of the triad, “g” one octave down to “G”, comprised of a chromatic descent from “g” to “B”, and then, down by major scale steps to “G”. The concluding section hops up through “c” to “f”, and ends with a stepwise journey down the C-minor scale from f, through “e flat”, to end where it began on “c”.

Bach is silent for a couple of seconds, but he accepts the King’s challenge. He plays the King’s theme three times before proceeding to play a beautiful three-voice Fugue. Please listen to the first minute of it:

The King, impressed by the three-voice Fuge improvised by Bach, and to see how far such art could be carried, requests to hear a Fuge with six voices. Fearing he cannot, without preparation, invent such a complex Fuge based on the King’s theme, Bach asks permission of the King to pick his own subject, which the King gently concedes. Bach proceeds then to execute it to the astonishment of all present in the same magnificent and learned manner as he had done that of the King.

After returning home to Leipzig, Bach composes a three-voiced and a six-voiced fugue, ten canons, and a sonata for flute, violin, and piano. All based on the King’s theme. This work has become known as the Musikalisches Opfer (Musical Offering), after a phrase from Bach’s dedication to King Frederick.

Bach sends this Musical Offering to King Frederick, and on the page preceding the first sheet of music, he inscribes: Regis Iussu Cantio Et Reliqua Canonica Arte Resoluta, meaning “At the King’s Command, the Song and the Remainder Resolved with Canonic Art”. an acrostic spelling “RICERCAR”, the original name for the musical form now known as the Fuge. Bach also uses this title for the two fugues. Ricercar is also an Italian word meaning “to seek”, which is appropriate since Bach doesn’t quite write all the music. He leaves hints on how to complete the scores as musical puzzles for the King to solve.

One example of these puzzles is the work entitled “Canon a 2 (Cancrizans)”. The original score looks like this:

The title “Canon a 2” implies it’s a two-voice canon, but the score only shows one voice. There are hints in the score for solving the puzzle of the second voice:

All of these hints strongly imply that the second voice (the follower) is the same as the first voice (the leader) only played backwards. What you listened to in the beginning was Canon a 2 (Cancrizan) as performed by the Stuttgarter Kammerorchester under the direction of Karl Münchinger. Listen to it again:

But note that since the second voice is the same as the first voice, only played backwards. We should be able to reverse the recording and the canon should still sound the same! Listen to the same canon being played backwards:

Now listen to the original canon once again. How much, on your same scale, did you enjoy it this time? Was it more? Significantly more? How likely are you to want to listen to the rest of the Musical Offering? For example by buying one of these two CDs? 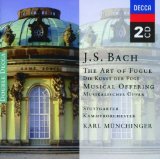 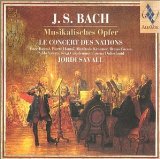 If you are like most people, you found the second hearing much more enjoyable than the first. This is because your expectations, the context in which you have an experience, and how much you know about something all have a big effect on how much enjoyment you derive. Reading the story taught you something about the music, it served as a guide of what to look for. Sure, it helps that this is a musical masterpiece by the best baroque composer there is. But the effect works, even if the story is false.

Oh, I’m not saying that the above story didn’t happen. I dressed it up a little, but the story is true. However, take a look at the Significant Objects project. They take an insignificant object (bought at a Thrift store) and ask a writer to make up a back story for it. Then they sell it on ebay. They are careful to disclose that the story is false, and they donate the proceedings to charity. But how much do the objects gain in value? This Russian Figurine that they bought for $3 was sold for $193.50!

In one experiment, scientists at Caltech and Stanford told people they would be tasting wines ranging in price from $5 to $90, and asked them to rate the wines. Unsurprisingly, the more expensive wines were rated higher than the cheap wines. The twister? All the samples were the exact same wine. Since people expected the more expensive wine to taste better, it tasted better.

So here is the trick I promised you. If you want to make an experience more enjoyable, find or create a backstory. It’s better if the story is true and you believe it, but it works even if it’s a made up story.

For much more information about the canons of Bach’s Musical Offering, look here, or here.

The Letter from Bach

This is the letter of dedication that Bach sent to the King (quoted from The New Bach Reader, p. 226-8):

In deepest humility I dedicate herewith to Your Majesty a musical offering, the noblest part of which derives from Your Majesty’s own august hand. With awesome pleasure I still remember the very special Royal grace when, some time ago, during my visit in Potsdam, Your Majesty’s Self deigned to play to me a theme for a fugue upon the clavier, and at the same time charged me most graciously to carry it out in Your Majesty’s most august presence. To obey Your Majesty’s command was my most humble duty. I noticed very soon, however, that, for lack of necessary preparation, the execution of the task did not fare as well as such an excellent theme demanded. I resolved therefore and promptly pledged myself to work out this right Royal theme more fully and then make it known to the world. This resolve has now been carried out as well as possible, and it has none other that this irreproachable intent, to glorify, if only in a small point, the fame of a monarch whose greatness and power, as in all the sciences of war and peace, so especially in music, everyone must admire and revere. I make bold to add this most humble request: may Your Majesty deign to dignify the present modest labor with a gracious acceptance, and continue to grant Your Majesty’s most august Royal grace to

Your Majesty’s most humble and obedient servant